skip to main | skip to sidebar

This plastic Farmall M was made in the early 1950's as a promotional item for the real Farmall M built at the Geelong factory in Australia. It could be quite possible that this model was manufactured in Australia also. From a distance you would say: 'this is a Farmall by Product Miniature'. If you look closer, there are some interesting differences to be discovered. Most obvious are the gold leaf 'Factory Geelong' decals. Then there are markings on the engine sump, showing a map of Australia with lines pointing to Geelong area and the letters 'APA'. The same letters are moulded onto the rear tyres. It could be the name of the maker of this model.
Besides the Product Miniature and the Australian Geelong 'M', similar Farmall models have been made by Brio of Sweden, Lego of Denmark and a wide front end version of the Farmall M manufactured for the English Doncaster plant. 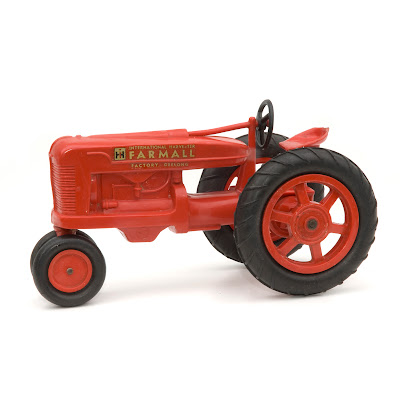